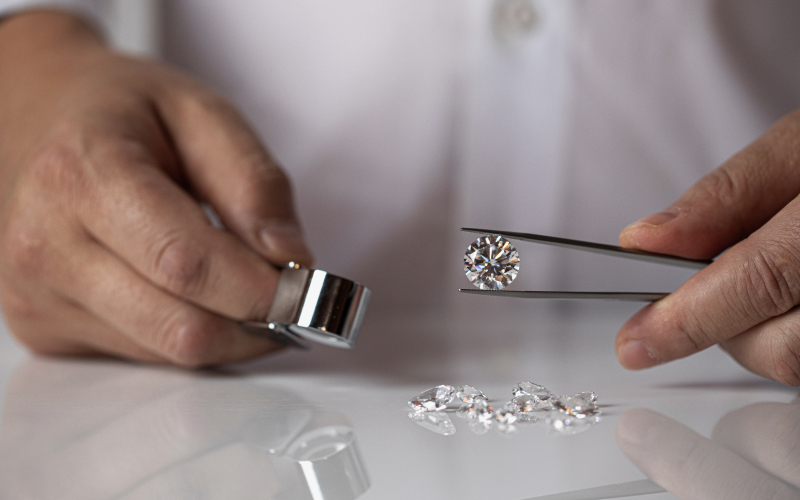 Diamonds vs Moissanite: What’s the Difference?

Moissanite and diamonds are two gemstones that have often been compared due to their somewhat similar appearance. In fact, many are even choosing moissanite over diamond for an engagement ring, which sparks quite a debate within the jewellery industry. But, there are significant differences between the two stones which you should learn if you’re considering one over the other.

In this guide, we’ll be looking at the differences in durability, colour, clarity, brilliance and price to help you decide which stone is right for you.

Moissanite was first discovered by a French scientist named Henri Moissan in a crater created by a meteorite that fell to the earth in 1893. Initially, he believed he had discovered diamonds as the gems looked so similar, but, after some testing, he discovered that the crystals were actually composed of silicon carbide rather than carbon.

These natural crystals are typically very small and exceptionally rare so they aren’t commonly used for jewellery. Instead, the moissanite available today is lab-created, using a form of crystalline silicon carbide after scientists spent many years of trial and error to replicate the gem.

What Are the Differences Between Diamonds and Moissanite?

Although designed to look like diamonds, moissanite is visually and compositionally very different in terms of durability, colour, clarity and price.

Diamonds are well-known as the hardest known mineral on earth and receive a 10 on the Mohs Scale of Hardness which is the official scale used to measure the hardness of every gemstone. This means that diamonds are extremely durable, resistant to scratches and perfect for everyday wear which is why they’re so popular as engagement rings.

Moissanite, on the other hand, received a 9.25, meaning it’s the second-hardest material used as a gemstone and is unlikely to scratch unless you store it with your diamond jewellery or it rubs against other diamond jewellery you may be wearing.

From a distance, moissanite and diamonds can look identical in colour. It isn’t until you get a  closer look where you can really see the differences. Diamonds are graded on a GIA colour scale, ranging from D which is colourless to Z which is light brown or yellow. Colourless diamonds and lab-grown diamonds won’t contain a hint of yellow or grey tints. Instead, they will be a sparkling bright white that’s extremely appealing.

Moissanite isn’t graded on the same scale as diamonds or lab-grown diamonds. And while they are sometimes labelled as colourless, this isn’t always the case. Under certain light, yellow, green and grey tints can easily be seen - especially if the stone is larger too. When you put a colourless diamond and supposedly colourless moissanite next to each other, it’s then easy to notice the stark differences in colour.

When it comes to shopping for diamonds clarity is an important factor to take into consideration. The fewer inclusions it has that are visible to the naked eye the better. A flawless diamond is the most desirable and, therefore, the most expensive and difficult to obtain. However, diamonds with a clarity grade of ‘VVS’ or ‘VS’ are also exceptional diamonds where it’s near impossible to see without magnification. Diamonds labelled as ‘I’ have the most obvious inclusions which can affect their brilliance.

Although moissanites are lab-grown they may still be imperfect and have very small inclusions. But, it’s very uncommon to see a moissanite for sale with a grade lower than the ‘VS’ level. A moissanite will always be eye-clean and close to flawless.

A diamond’s sparkle and brilliance, whether natural or lab-grown is unbeatable. When you look at a diamond in the light you’ll notice white flashes which is the brilliance. If you see coloured flashes, this is referred to as fire. And the surface sparkle of the diamond is known as scintillation. The combination of these three types of light is what gives diamonds their dazzling look.

Moissanites have a different kind of brilliance than diamonds and are fierier due to their different faceting pattern. This means their shine is more colourful which some call the ‘disco ball’ effect rather than the white brilliance found in diamonds. This may not be something that’s noticeable right away, but the bigger the stone is the more obvious.

One of the biggest differences between diamonds and moissanite is the price and the value. It shouldn’t be a surprise to learn that moissanite is significantly less expensive than diamonds, which may appeal to some as it means you are able to buy a larger stone for less. The price of moissanite only really varies depending on the size too, whereas the price of natural and lab-grown diamonds can vary depending on the shape, carat, cut, colour and clarity.

While moissanite is the more affordable option, it’s important to remember that they’re not nearly as valuable as diamonds. So, you’ll ultimately be buying a stone that’s worth very little in the long term. Unlike a diamond, where the value can increase over time and can be seen as more of an investment.

Is Moissanite as Good as Diamond?

Moissanite is a cheaper option than a lab created diamond, however, this is reflected in the quality and appeal of the jewellery. Moissanite cannot be considered as a diamond as they are two entirely different gemstones with noticeably different looks and characteristics. Even someone who isn’t an expert in jewellery will be able to see the differences, especially in the colour and the brilliance of the stone.

If you’re wanting a real diamond that is more ethical and affordable than a natural diamond, browse our beautiful range of lab-grown diamond rings.

Need more information? Learn all about lab-grown diamonds vs natural diamonds and the differences between the two. 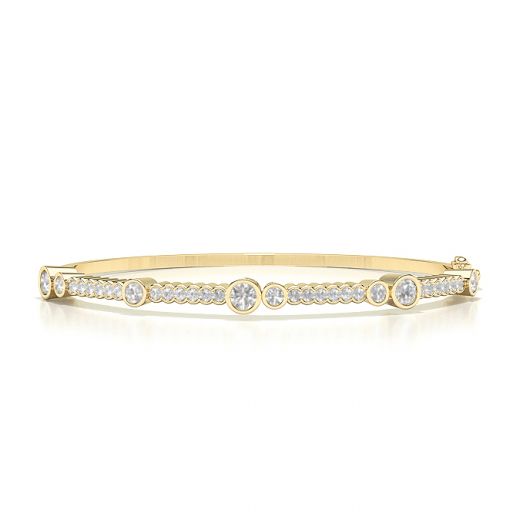